For more than 30 years, Jim and Jamie Dutcher have focused their lives on the study and documentation of wolf behavior. As two of America’s most knowledgeable experts on wolves, they are devoted to sharing their unique background for the betterment and understanding of this keystone social species.

Having completed award-winning films documenting beavers, cougars, and marine ecosystems, Jim Dutcher turned to a more elusive and challenging subject: the wolf. After obtaining a permit from the U.S. Forest Service, he and his wife, Jamie, lived in a tented camp on the edge of Idaho’s Sawtooth Wilderness, intimately observing the social hierarchy and behavior of the now famous Sawtooth Pack. Over six years, their unprecedented experiences resulted in three prime-time documentaries for ABC and the Discovery Channel. These films won Emmy Awards for Outstanding Cinematography, Outstanding Sound Recording, and Outstanding Informational Program for Science and News—the last in recognition of the meticulous fact-checking of source references that is an integral part of the Dutchers’ filmmaking process.

Yet with wolves still being vilified and persecuted, the Dutchers knew that the pack featured in their documentaries could play an even more important educational role. In 2005, they put down their film-making equipment and founded Living with Wolves, a nonprofit organization dedicated to raising broad public awareness of the truth about wolves. Today, Living with Wolves is a nationally recognized leader in the field of wolf advocacy, with many thousands of followers actively involved in its work.

Jim served as a consultant to the gray wolf reintroduction project for the design of the holding enclosures for the wolves brought to Yellowstone National Park. In 1995, Idaho governor Phil Batt appointed Jim an ex officio member of the wolf reintroduction oversight committee, on which he served for five years. For his film on cougars, Jim also won the Wrangler Award, given by the National Cowboy Hall of Fame. Jamie began her career as an assistant in the hospital of the National Zoo in Washington, D.C., and together with Jim, led three National Geographic Expeditions to Alaska, working with revered wolf biologist Dr. Gordon Haber to observe pack hunting techniques and the culture of knowledge within individual wolf families.

Jim and Jamie now travel across the United States to present their multimedia program and to share their experiences and the truth about wolves. They speak to groups ranging from students of all ages to audiences at major museums, including the American Museum of Natural History in New York, the Smithsonian Institution, Chicago’s Field Museum, the Natural History Museum of Los Angeles, and the California Academy of Sciences. Over 300 radio, television, Internet, and print media outlets worldwide have interviewed them on the subject of wolves, and they have appeared on or in Today, Good Morning America, People magazine, the New York Times, National Public Radio, the BBC, and countless other venues. 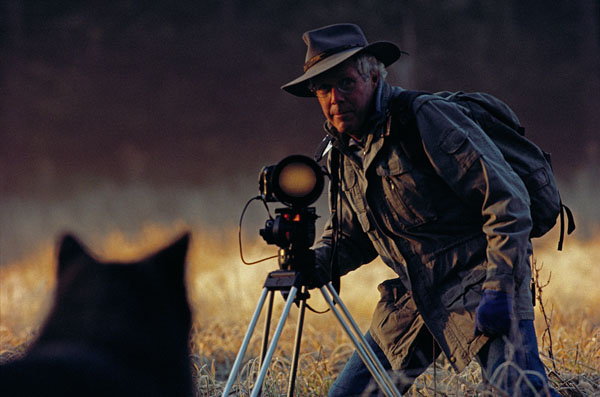