While their name suggests the uniformity of a single drab color, gray wolves are actually very diverse in appearance, boasting an extensive color palette. Not only do gray wolves cover the spectrum from black to white, including many shades of gray and grizzled, they can also be hues of brown, red, tan, cream, buff, taupe, and more. While some wolves may be almost entirely white or black, a wolf’s coat is typically not a solid color and is usually broken up with markings, or dappled and tinged with one or more different colors.

Even within a single litter, diversity abounds. At birth, the pups are darker and more uniform in color. But, as they grow, their adult coats gradually emerge, revealing distinctly different appearances. Arctic gray wolves are the exception to such broad-ranging diversity. Blending into mostly snowy landscapes, they typically appear in shades of white or creamy white, with occasional flashes of yellow, gray and black.

All wolves have a dense undercoat of light-gray downy fur, an insulating layer that they shed every year for the hot summer months. However, a wolf’s color is due to the outer coat, consisting of long, moisture-repelling guard hairs. Guard hairs are often banded in several different colors, imparting a variety of coloration, markings and patterns. 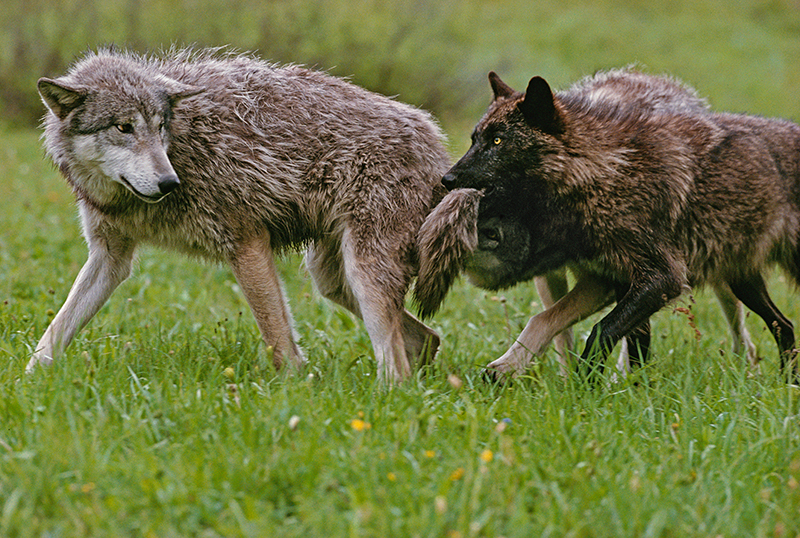 The Origin of Black Wolves

Very recent genomic sequencing of Yellowstone wolves has revealed that North American wolves inherited the black fur gene when they bred with the domesticated dogs of early human inhabitants of North America around 7,000 years ago in the area of the Yukon. Over time, the presence of this gene has expanded geographically, especially in western North America. Black wolves are very uncommon in gray wolf populations to the east, such as those of the Great Lakes region.

Two gray wolves cannot have black pups, due to genetics. In Yellowstone, about half of the gray wolves are black. Interestingly, in Yellowstone it is found that the vast majority of the time, a black wolf and a gray wolf breed, while it is much less common for two black wolves or two gray-colored wolves to breed.

The genomic sequencing work with Yellowstone wolves is still ongoing and continues to lead to more fascinating discoveries and theories, some of which can be read about in the following links: