the lowest on the totem pole

The social hierarchy of a pack is what maintains order, dictating who makes decisions, who mates with whom, who eats first and who eats last. 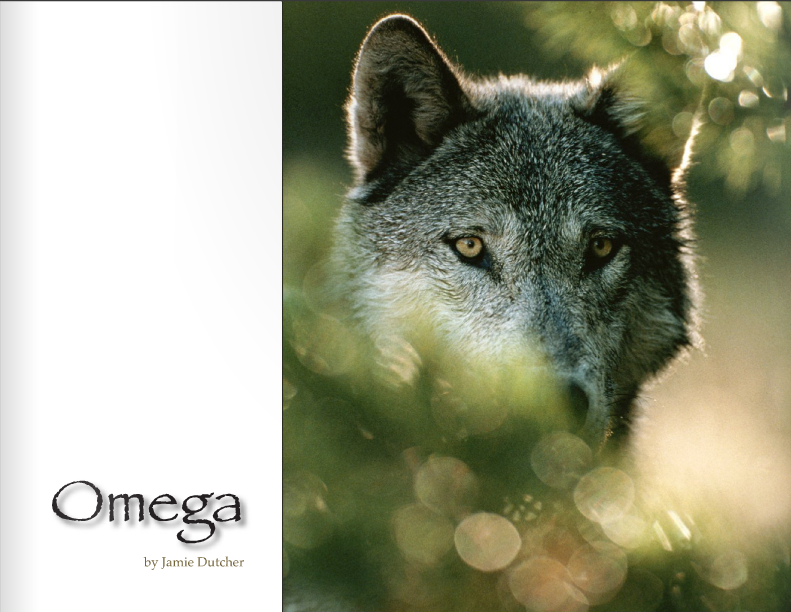 This order is constantly reinforced by displays of dominance and submission. Unfortunately, the omega bears the brunt of this behavior. One or many of the wolves will assert themselves over the omega, who flips over onto his back, whimpering in surrender. Generally this is a bloodless exchange, but at times, especially during the breeding season, it can get vicious and extremely difficult to watch.

In wolf hierarchy, the males tend to dominate other males and the females dominate other females so that there is generally a low ranking member of each sex. The alpha pair would never allow the omega male and female to mate, therefore the omegas are not pair-bonded to each other like the alphas.

In the beginning of the project, the Sawtooth Pack was small, consisting only of five males. So Lakota held the omega position alone. One of the things that was so noticeable about Lakota was his posture. He kept his tail tucked, his shoulders hunched and his head lowered as he moved about with uncertainty. Because of his demeanor it was difficult for me to see, but actually Lakota was a huge wolf, larger than the three other mid-ranking wolves and possibly even larger than his brother, Kamots, the alpha. His paws were definitely bigger.

Obviously there was more to social rank in a wolf pack than mere size and strength.

Over the years that I observed him, Lakota would often approach me and timidly lick my face. During these occasions, I would run my hand down his back through his fur coat. Sadly, his skin was riddled with small bumps and scabs where the other wolves had nipped him, and there were small scars on his muzzle where the fur would not grow back. In dominance displays, a dominant wolf will frequently grab the muzzle of the submissive wolf, as a mother might do to discipline her pups. Lakota’s face bore the marks from such encounters. As I would sit with him, he would begin to relax a little, beginning to trust that I wasn’t going to hurt him. Then, he would take his paw, gently place it on my shoulder, and gaze at me with his sweet, wise, amber eyes. We would sit that way for quite a while. From that moment, I was captivated by him and would forever hold a special place for him in my heart.

Over the years, Lakota and I continued to have this special bond. Sometimes I would purposefully sneak away from the rest of the pack to carry on this clandestine friendship with the beleaguered omega. We were careful not to show any interest in each other when the rest of the pack was nearby; both of us were concerned that he would call attention to himself and risk being disciplined by one of the mid-ranking wolves. Instead, I would join him at times when he was by himself, and we would sit together, his paw on my shoulder.

Although Lakota was not the initial choice for pack omega, the killing of Motaki by a mountain lion had forced him into that position and he began to adapt to it. It may sound odd, but he became a wonderful omega.

In some ways, the omega is like the court jester.

He must suffer terrible abuse at the hands of the king and court, but he is undeniably loved. Like a jester, the omega is often the one to instigate play and act the fool.

During a period when the pack’s mood was calm and relaxed, I watched Lakota approach his brother Kamots. The omega suddenly crouched into a play stance with his head low, front legs splayed wide, rump and wagging tail in the air. Kamots would spring into action, darting and snapping playfully. Soon they were tearing through the meadow, Lakota only inches ahead of Kamots’ jaws. The knowledge that this chase was not a dangerous dominance display was written all over Lakota’s body. He zigzagged through the grass with his mouth agape and his lips pulled back as if in a smile, nearly allowing himself to be caught, then leaping ahead.

Eventually Lakota was caught, or let himself be caught. He flipped over onto his back in surrender, bestowing on Kamots the full victory. Kamots straddled his brother snarling and snapping in mock aggression. Lakota gently licked the muzzle of the victor, the wolf equivalent of saying “uncle,” and the game was over.

On another occasion, I again saw Kamots and Lakota racing through the meadow in a game of chase. The two brothers are extremely similar in appearance — large with very typical black and gray markings — so it took me a while before I realized to my amazement that this time Lakota was chasing Kamots. I couldn’t imagine how this role reversal could be happening. In an amazing twist in their standard game, Kamots was allowing himself to be the victim!

As I grew to know these wolves I realized that this was a regular occurrence, one that bears no scientific explanation other than the fact that sometimes it is fun to be the one getting chased. To me, it implies that there is a lot more going on in the inner life of wolves than we can imagine. In humans, an older, stronger brother might let a younger brother pin him in a mock wrestling match, feigning defeat and letting his younger sibling celebrate victory. Both know who the dominant one is, but it is fun to reverse the roles. Many a scientist would gasp at the thought of ascribing emotions to an animal but since I’m not a scientist, I can allow myself the indulgence. Witnessing scenes like this, the only interpretation I could make was that Kamots and Lakota genuinely cared for each other.

Some years later, while scouting for wolves along the Yukon River with Jim, I watched from a small airplane as a pack played a game of tag in the deep snow. Though it was too far to see, I could imagine their expressions of joy as they took turns running after each other and nipping at one another’s tails, and I knew that one of the wolves below me was the omega, inciting the others into chasing him and keeping the game going.

Sadly, there were times when Lakota’s playful attitude would backfire. The attention he would draw to himself could sometimes result in a full-on mobbing. As he’d run, we could see him realize that the pursuit was not a game this time. It was painful to watch his hopeful expectations dissolve, fear spring into his eyes, and his entire posture change. Quickly he’d flip over onto his back and yelp in submission while each mid-ranking member of the pack got his digs in.

Amazingly enough, he would return time after time, inviting the pack to join in a game of chase or tug of war, eternally brave and eternally hopeful.

Group rallies were another risky time for Lakota. Often the pack gathered together and howled, as if to celebrate its solidarity. The real reason for this ritual is unknown. Sometimes it appeared that Kamots would purposefully start to howl, apparently calling the pack together and reminding everyone of his leadership. Other times the rallies seemed more spontaneous, with a spontaneous howl bubbling up inside one of the wolves, then bursting forth uncontrollably.

When one wolf began to howl, the others would quickly join in and assemble around Kamots. As the rally grew in intensity, the wolves often displayed their dominance, sparring, growling and pinning each other to the ground. These were dangerous times for the omega. Regardless of the bickering that went on between the mid-ranking wolves, Amani and Motomo, most of the aggression was transferred to Lakota. All the same, he would often be there, lending his voice to the group howl.

When I began recording the sounds that would later be used for the soundtrack of Wolves at Our Door, I made an effort to record each wolf’s individual voice as cleanly as possible. I would try to find an occasion when a wolf was howling more or less by himself, rather than right in the middle of the group. This was easier with Lakota because he often stood on the fringe, howling, but trying to keep a low profile. With the eight-foot boom microphone in front of me, I’d slowly and quietly approach him in a crawl, careful not to disturb his singing.

When I first recorded his howl, I was amazed at what was coming through my headphones. Lakota, eyes shut and head thrown back, was just pouring his heart out. His rich, mournful voice soared into the evening and hung in the air for what seemed like forever. I actually found myself welling up at the sheer beauty and expressiveness of his song. I felt as though I were listening to him sing the blues, giving voice to all the loneliness and pain that his social position brought him. Even when new pups were added to the pack in later years, no member of the Sawtooth Pack ever came close to comparing with the beauty and sadness of Lakota’s howl.

To experience a pack of wolves howling together is to bear witness to one of the most mysterious and awe inspiring events in nature.

It almost seems that the wolves themselves have no choice but to join in when the Alpha howls. Lakota could never be certain if his participation would get him into trouble, but he could not help but be a part of it. He would slink from wolf to wolf and pay his respects, his tail tucked and his head nearly scraping the ground. But as Kamots continued to howl, you could see Lakota’s voice welling up inside him, and, after a few tentative mumbles, he was howling away, trying to keep off to the side, but wanting to be involved.

His participation was looked on as almost an insult by some of the mid-ranking wolves, as if he were overstepping his bounds. Amani seemed especially determined to put Lakota in his place and during pack rallies he would frequently rush at Lakota, snarling and flashing his teeth. It often looked as though Amani had knocked Lakota off his feet, but in reality Lakota was just flipping over and surrendering. There would follow a chorus of growls and yips while the other wolves got into the action. Although Lakota was rarely hurt in these displays, his cries were agonizing to hear. Amani would stand triumphantly over Lakota, making the omega beg to be let up. Once he was satisfied that his point was made, that he was the more dominant wolf, Amani would let up and Lakota would slink away quietly, through with howling for a while.

I had grown accustomed to being extra careful in giving attention to Lakota but there were times when our surreptitious meetings would be discovered. Any human activity always drew intense interest from the pack. If Motomo or Amani spotted Lakota and me sitting together, they would hurry over to investigate and to find out why Lakota was getting attention that they were not.

In some ways they reminded me of children. If one wolf had something, a bone, a stick, or the attention of a human, all the others wanted it. I was most concerned at these moments that my display of affection would result in Lakota’s getting pummeled, so I quickly learned to turn my attention to the other wolves when they approached. This seemed to satisfy them and keep the peace. Lakota knew the rules all too well and would discreetly walk away from me, unharmed but always the underdog.