DID YOU KNOW? Killing wolves has unexpected consequences. 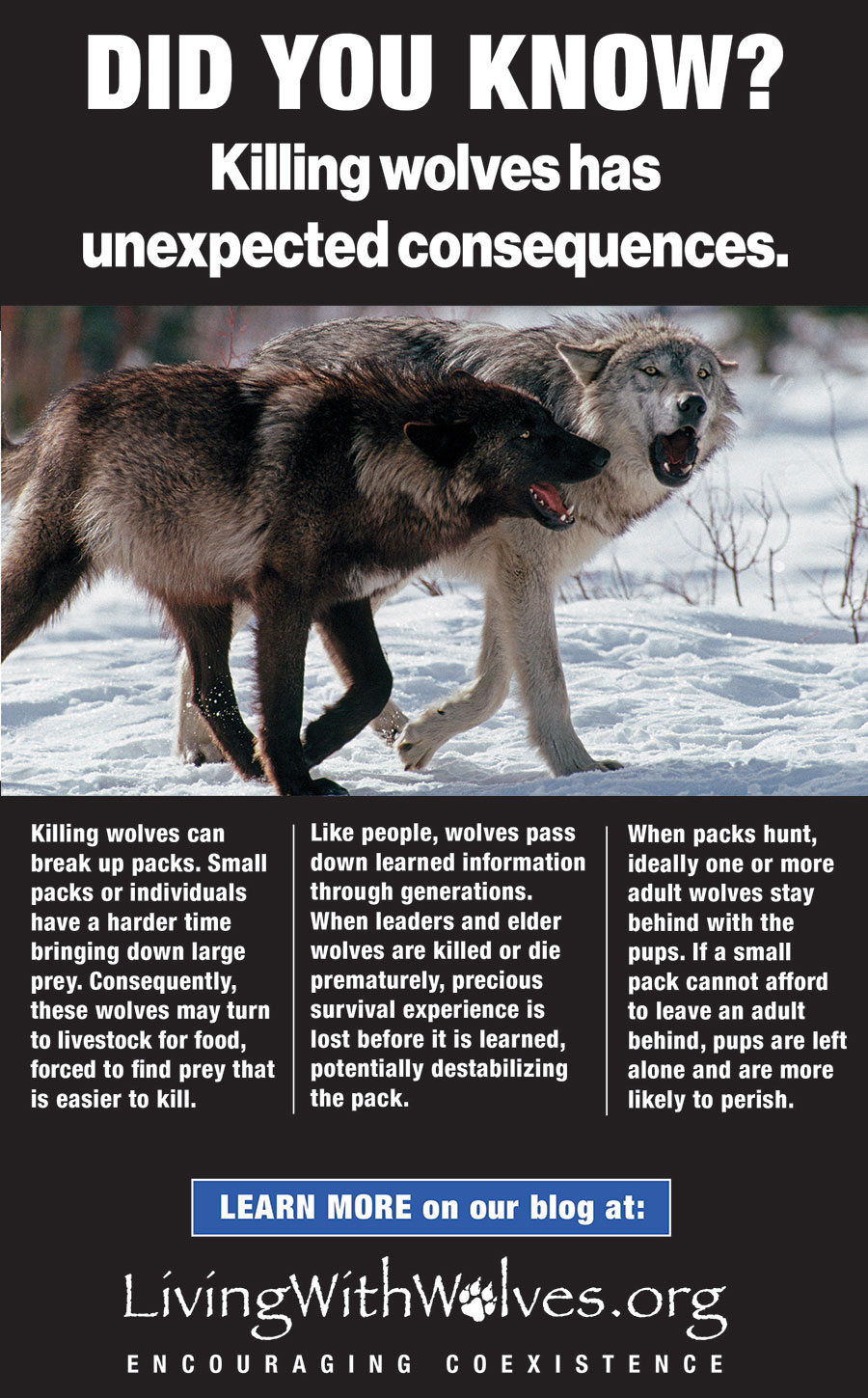 Humankind is inclined to kill wolves, whenever they are perceived as a nuisance, with little regard for the consequences. There are ethical and ecological consequences in the way America’s recovering wolf population is being culled, but additionally, for an animal that lives in family groups, killing off even just one family member can have dire consequences for survival as a pack. The loss of a member can be devastating, particularly if the wolf killed is one of the pack leaders. Killing wolves can also exacerbate a problem that people were trying to solve in the first place: wolf predation on livestock.

The presence of elders is what shapes the very character of a wolf pack. Young adults bring vitality and strength in numbers, but the older wolves guide the behavior of the pack as a single cohesive unit. The longer scientists are able to carry out continuous studies of wolf packs, the more they see that different packs actually have what could be considered different cultures.

The Mollie’s Pack in Yellowstone developed a culture of bison hunting, using large numbers to tackle the biggest and most dangerous prey on the continent. Most packs don’t even attempt to hunt bison, instead focusing exclusively on elk and deer. Kira Cassidy is a Research Associate with the Yellowstone Wolf Project. She studied the impact of old wolves in a pack, seeking to determine whether old wolves (four years old or older) were an asset or an impediment to pack success. You can view her fascinating TED Talk here.

The study revealed that a wolf pack was 2.5 times more likely to win a territorial dispute with another pack if it had at least one old wolf. Contrary to what you might expect, the explanation didn’t involve superior strength or vigor, because as they age, wolves may participate less in the physical acts of hunting and territorial defense. The reason for success lies in the fact that older wolves possess experience. Old wolves know the terrain and are apt to pick a more favorable location for engagement. Where young wolves might panic, older experienced wolves are likely to be calmer and better able to keep their pack unified during a conflict. The presence of an elder was so critical, that smaller packs with older wolves fared better than larger packs with no elders. The soul and wisdom of the pack lives in its elders, as the keepers of knowledge and experience.

Wolf biologist, Gordon Haber, wrote extensively about the Toklat wolf pack, which had developed a unique style of hunting Dall sheep on the rocky slopes of Denali National Park. When attacked, Dall sheep instinctively run uphill and into terrain where they have an advantage. The Toklat Pack’s strategy was to move up the slope unseen and then attack from above, thus cutting off the sheep’s escape route. The tactic created confusion among the sheep, and the Toklat Pack exploited it time and again. Other packs occasionally hunted Dall sheep, but none did it the way the Toklats did, or with as much success. It was an expression of the Toklats’ unique culture.

In 2005, the Toklat Pack suffered a devastating blow. Trappers set up their trap lines just outside of the human-defined borders of Denali, and when the Toklats ventured outside of the park’s protected interior, the alpha female was caught in a leghold trap and killed, along with two younger wolves. Shortly thereafter, the alpha male was shot. The six youngest wolves who remained retreated into the park. Haber resumed his study of the pack, but he never again saw them hunt Dall sheep as they once did. Instead, the pack subsisted on snowshoe hares that year, a prey animal the youngsters were able to hunt. Haber’s observations offer a clear example of how experience and wisdom are lost when the elders of a wolf pack are killed.

Similar to the Toklat pack turning to easier prey like snowshoe hares, wolves that live in areas where livestock are grazed on the open range may turn to livestock animals after losing a pack member. Younger wolves, lacking the experience, and possibly the numbers, to take down larger natural prey, like elk, may resort to killing livestock. When wolves are killed, predation on livestock can actually increase. Killing wolves can therefore have the doubly negative consequence of diminishing a pack’s ability to survive and increasing predation of livestock. A large stable pack is a far better presence for ranchers than a fragmented bunch of young wolves.

Humans in North America have killed more than a million wolves since European colonists first arrived. Hundreds of years later, the same conflicts with domestic livestock occur, and the same tactics are used in retaliation. Often, when a pack elder is killed, the pack’s guiding culture is destroyed, and along with it, its predictable behavior. When wolves are allowed to maintain their pack cultures, they are much more predictable. They hunt the prey they are accustomed to hunting, in the places they know best. But wolves who have lost their pack knowledge can become desperate and unpredictable; their behavior can be random. In killing wolves, we are willfully continuing to undermine the very thing that could make harmonious coexistence between our two species possible. It is time to consider an alternative.

Excerpted from the Dutchers’ book, The Wisdom of Wolves