DID YOU KNOW? Idaho is using your tax dollars to kill wolves. Idaho is using your tax dollars to kill wolves.

Of the many unconventional ways the State of Idaho has found to kill wolves, the most egregious was conceived in 2014 with the formation of the Wolf Depredation Control Board. The singular purpose of this board is to kill wolves. It was designed to be “a 3-way partnership between livestock owners, sportsmen, and the legislature” to pay Wildlife Services, a federal agency, to kill wolves that attack livestock and elk. Gray wolves live in at least twelve states, but only Idaho uses taxpayers’ dollars to kill them.

What's In a Name?

In Idaho, wolves survive on elk. Elk are what they are expected to eat. Yet this board mandates that the state kill wolves that eat elk. In 2020, estimated at 120,000 animals, Idaho’s elk population is 4% below its historic all-time high of 125,000 elk. Meanwhile, wolves are still killed to ostensibly provide more elk for hunters.

The name, Wolf Depredation Control Board, is a purposeful misnomer designed to mislead. “Depredate” means to plunder or lay waste, to pillage or ravage. When a native predator eats its native prey in order to survive, it is not an act of plundering, pillaging or ravaging. It is predation, a natural hunting behavior and survival mechanism. It is not depredation. Even when wild predators kill domestic livestock, it is still just an act of predation. Humans plunder, pillage and ravage. Predators hunt and eat prey.

Killing predators that attack livestock is expensive, messy, unsupported by much of the public, and the antithesis of coexistence. It is a temporary solution that simply leads to a cycle of more killing, because nothing is done to address the underlying causes of the conflicts between wild predators and livestock. It is reacting to a problem rather than preventing it. There are many proactive non-lethal techniques and tools livestock producers can utilize to protect their animals, yet the Wolf Depredation Control Board refuses to allocate one penny for non-lethal measures.

Former Idaho Governor, Butch Otter was no friend of wolves. He capitalized on every opportunity to politicize them. In 2010, he ordered officers of the Idaho Department of Fish and Game (IDFG) to not enforce federal law when people poached wolves. In 2011, he declared an emergency disaster due to wolves in Idaho, claiming they pose a danger so menacing that people were no longer safe engaging in outdoor activities. But in the real world, in the 27 years since the return of wolves to Idaho, the state has yet to record a single violent encounter between a wolf and a person. When IDFG reported 500 wolves living in Idaho, Governor Otter claimed there were 1,500. When IDFG suggested that wolves might be a reason why two of the state’s 29 elk management zones were below the department’s population objective, Otter inflated that number to 11 of 29 zones.

There are many more examples of Governor Otter fueling anti-wolf hysteria and misleading the public to justify his attacks on wolves. But the pinnacle of Otter’s relentless assault on wolves was the creation of his Wolf Depredation Control Board. With Governor Otter’s track record, it should come as no surprise that his board refuses to consider using even some of the money to pay for range riders, livestock guardian dogs, or any of the other myriad tools used to protect livestock from predators, and instead chooses to spend all of its resources exclusively on killing wolves.

Governor Otter designed the Wolf Depredation Control Board to consist of five members, all of whom seem to have a similar interest in killing wolves as opposed to coexisting with them. Earning the nickname “the wolf-kill panel,” they are the Director of the Idaho Department of Agriculture, the Director of the Idaho Department of Fish and Game, a member representative of sportsmen’s (hunters and trappers) interests, a member representative of the livestock industry, and a member of the public at large. The latter three are appointed by the Governor.

The current representative of the public, Stephen McGrath, is an Agriculture Law Attorney. Richard Savage represents the livestock industry, and Butch Suor represents sportsmen’s interests. Prior to Suor, the sportsmen’s representative was Tony McDermott. McDermott was the first appointee to that post in 2014, and despite a two-year term for his position, he held the post until early 2021.

Tony McDermott was a former IDFG commissioner known for his hand in shaping the department’s wolf-reduction policies. He also was instrumental in the formation of a group that pays a bounty for dead wolves, which they refer to as expense reimbursement, of up to $2,500 per wolf in Idaho. The Wolf Depredation Control Board allocated $200,000 to this organization in 2021 as part of a cooperative agreement to kill more wolves. In 2012, while McDermott was a commissioner at IDFG, he misrepresented wolf numbers, asserting that there were 1,200-1,600 wolves in Idaho. The commission would have been well aware that the Department’s latest annual count was only 746 wolves and, at that time, the population was declining.

McDermott’s own words illustrate why he is a good fit for a wolf-killing board. “The biggest resource mistake Idaho has ever made was the reintroduction of wolves,” he said. “Idaho didn’t want wolves, but we didn’t have a choice. We got them stuffed down our throats by the U.S. Fish and Wildlife Service, and that was not a very good decision.” Speaking as a board member for the bounty-paying organization, he said, “We are in lockstep with (Idaho) Fish and Game. We are about elk and we are about predator management, and the two go hand in hand.”

“Our deer, moose and elk are Idaho’s livestock… They should be protected,” said McDermott in an interview while serving on the IDFG commission. As evidenced by their policies, this is the underlying perspective of the IDFG commission as a whole, that wolves should be killed so that more elk and deer can be provided for hunters to shoot, despite the fact that IDFG records indicate that the elk population is robust and near a record high. On an annual basis, the board is given $400,000 of Idaho taxpayers’ dollars. This funding from the general fund is supplemented annually by $110,000 (or very close to that amount) from the Idaho Department of Agriculture, which is matched by the Idaho Department of Fish and Game.  $510,000 is used to kill wolves presumed to be in conflict with livestock. The matching funds from IDFG are used to kill wolves in parts of Idaho where the department deems there are not enough elk to sell to hunters. The IDFG contribution to the Wolf Depredation Control Board was increased nearly threefold to $300,000 in the egregious wolf killing legislation passed in 2021.

In 2020, at the outset of the COVID-19 pandemic, in which state resources were stretched thin, the Wolf Depredation Control Board was granted its full funding. In 2021, the board has nearly $1 million with which to kill wolves. Idaho’s current governor, Brad Little, is planning $200 million in budget cuts, of which $99 million will come out of K-12 education. Idaho already ranks last in the U.S. in per-student spending.

Similar concerns about how Idaho spends its money were voiced in 2014, when the Wolf Depredation Control Board was being debated in Idaho’s House of Representatives. Those who opposed the bill issued concerns and flagged other priorities that they, and their constituents, considered more important.

Ilana Rubel, representing District-18 in Boise said, “The number of wolves has dropped by 30% and has dropped every single year since 2009 based on the hunting and control measures we have right now…we have 39 school districts that can’t keep the lights on five days a week. This money is going to come out of the other pots. It’s going to come at the expense of roads and schools, teachers and every other priority that we have, and I don’t see any rationale for an expenditure of this magnitude at this time in light of the data we’ve been provided.”

Mat Erpelding representing District-19 in Boise said, “That’s basically two teachers per school district in Idaho that could be paid for, or we can use it to eradicate somewhere between 300 and 400 wolves.”

Phylis King, representing District-18 in Boise said, “This bill is a reckless use of taxpayers’ money. I think it’s also an ill-conceived and non-scientific way to manage the state’s wolf population. By singling out one species of animal to slaughter and using general funds, we are setting precedent.”

The Wolf Depredation Control Board was originally set to disband after five years, at which point in 2019, the Idaho State Senate removed the sunset clause and made the board permanent. Ironically, the board has struggled to find ways to spend the monies allocated to it. When the State Senate was debating the bill that made the board permanent, Minority Leader Michelle Stennett pointed out that the board was sitting on $1.228 million, nearly two years of its annual installments, just before receiving its 2019-2020 funding.

Idaho spends roughly the same amount of money to kill a wolf as it does to educate a child per year. Most Idahoans have never seen a wolf. Most Idaho hunters have never seen a wolf. Elk are abundant and attacks on livestock are rare. Very few livestock producers have ever experienced them. But budget cuts are jeopardizing Idaho’s educational system while the uniquely Idahoan bureaucracy to kill wolves with taxpayer dollars is fully funded. Which is a better investment in Idaho’s future? 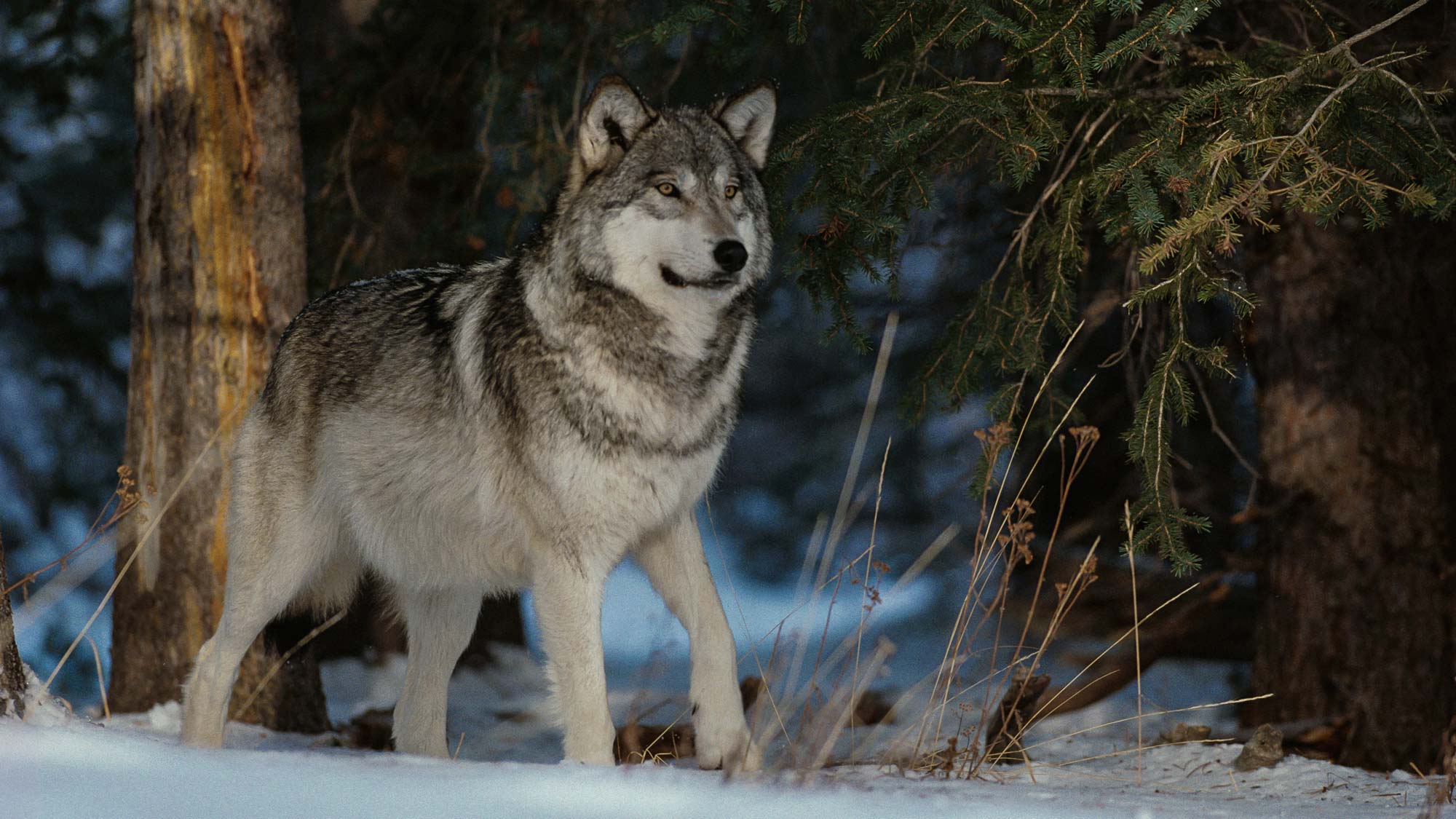